Dr. Zazie Todd, author of Wag: The Science of Making Your Dog Happy, had a great post this week about how to prioritize training for the rescue dog you have recently brought home. She offers a variety of suggestions for what to focus on, depending on the age and temperament of the dog you have adopted, but she also offers some valuable general principles that should guide your training agenda.

1. Use reward based training.

Perhaps the most important thing you can do is to commit to using reward-based training methods with your new rescue dog. Even if you have previously used methods such as leash corrections, prong collar, shock collar, etc., don’t do that with your new dog.

I have blogged about this in the past (and Dr. Todd mentions this as well in this post), but fear/force based training methods […]

Can dogs get Covid?

Faithful readers of this blog know that I rely on the Whole Dog Journal for information on a variety of topics relating to the canine experience. In this week’s WDJ blog, editor Nancy Kerns, discusses what has been discovered in the last year about Covid-19 and dogs. The good news is that while the virus “can infect the pets who live with infected humans,… the infection doesn’t seem to adversely affect them. And there haven’t been any documented cases of COVID-infected pets causing infections in their owners.” (WDJ)

On the other hand,  according to an article in the March 19, 2021 issue of Science, “[t]wo reports released this week have found the first evidence that dogs and cats can become infected by B.1.1.7, a recent variant of the pandemic coronavirus.” The first incidences of pet infection came from the Ralph Veterinary Referral Center in Britain, […]

No time to train your dog? Think again…!

“Julie, you’ve given me a lot of good information and I want to work with Buddy on all of it, but I don’t have an hour a day to give to it or to him!” lamented Sam, a busy professional and parent of three kids.

There are very few people who have a spare half hour every day (much less a full one)  just begging to be filled with yet another thing one has to do. And yet, the puppy needs to be trained…so what is a busy family suppose to do? Drop everything else and devote themselves to 24 hour dog training?

That is an option that would produce a well trained canine, but who can do that? No one I know…

Training your dog, however, doesn’t require an an “all or nothing” commitment, nor do you have to train in one long session. In fact, you and your dog are […]

Does your dog come to you reliably?

Sparky, stood by the fence in his back yard glaring at a squirrel in the neighbor’s maple tree. Clearly, the rodent didn’t understand that tag means “I get to grab you, then you’re it!” Not, as the squirrel thought, “I race up the tree and chatter at you.”

Sparky’s owner, Beth, needed him to come inside. Even though she was about 98% sure that he wouldn’t come if she called him, she asked him anyway, repeatedly. Sure enough, Sparky did not comply and Beth ultimately got a leash and pulled/conjoled Sparky into the house. Understandably, Beth was frustrated and Sparky was confused.

When we met, her primary goal was to get Sparky to come “the first time I call him, not the 15th!” I wanted that for her too, so we worked on improving Sparky’s recall.

If you also desire increased compliance, less frustration, and more fun for everyone, here are two things […]

Is your dog going stir crazy? 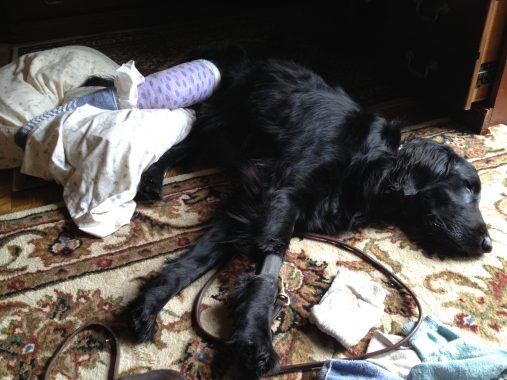 Bingley the day after his second surgery.

Mr Bingley tore his cranial cruciate ligament and required surgery. His physical therapy and recovery went beautifully. He was about to get a clean bill of health when, on a short walk on leash, for some freakish reason, his leg splintered around one of the screws. The subsequent surgery put his leg in a cast for 6 additional weeks, followed by another round of physical therapy to gently re-introduce activities.

While it was relatively easy to keep him quiet the first few days, my ever-enthusiastic retriever soon became bored with short walks and no running, chasing squirrels, or playing fetch. So what’s a person to do with a dog who needs recovery time, but disagrees with your definition of reasonable activity?

Is Your Dog Going Blind? 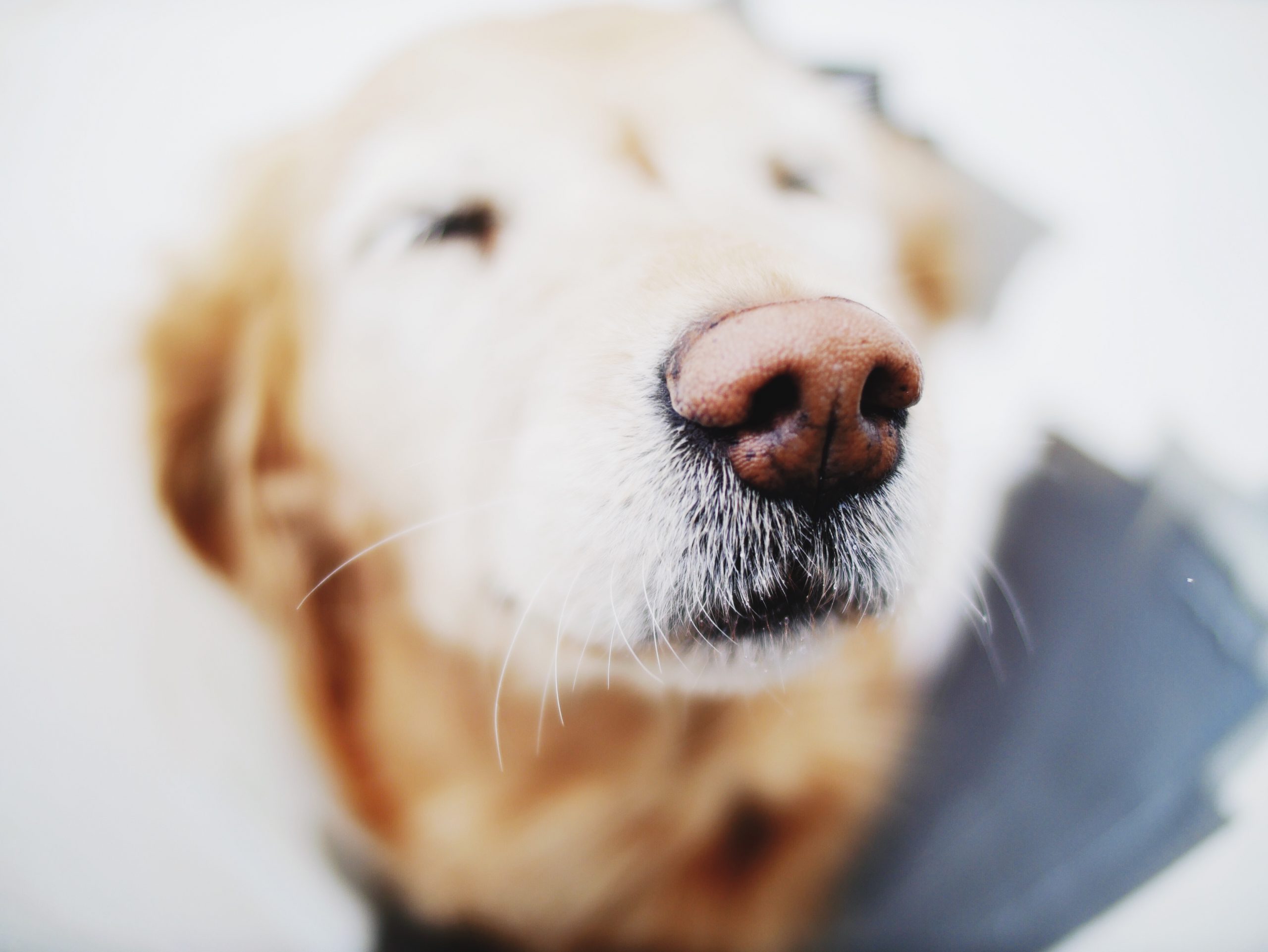 Reisner Veterinary Services is a reliable source of great pet information as well as fodder for my blogs! Recently they posted a link to the article, How to Tell If Your Dog Is Going Blind. It’s a quick read filled with useful information starting with  some common “noticeable signs” that indicate your dog maybe having vision issues. These signs may include:

If you suspect your dog may be having vision issues or is losing its eyesight, you can do a preliminary test at home using a cotton ball:

I hear you knocking…but I’m too busy with a Kong to bother with the door! 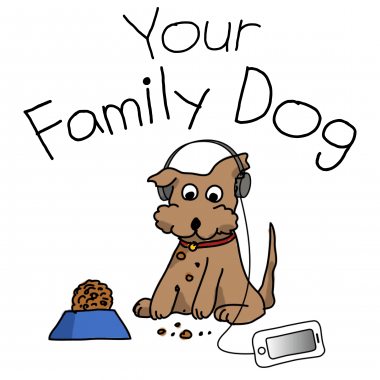 I have been doing the podcast, Your Family Dog, since 2016. I have learned a lot from my co-hosts (Colleen Pelar, and Tina Spring), from our guests, and (I was stunned to realize) from myself as well! Who knew?!?! Having to come up with topics, answer questions from my partners in crime, engage guests, and think hard about the why and how I train dogs, has shown me two things: that I know more than I thought, and that there is much that I don’t know. It’s a lovely, albeit sometimes crazy-making, conundrum that allows me to continue to practice my trade, but keep an open mind to new ways of looking at the world of dogs.

One thing I have found to be helpful in my own domestic world of dogs, that I now share regularly, is: […]

Games for Kids and Dogs 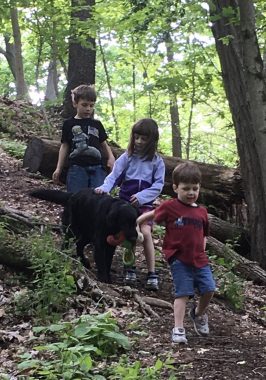 Much has been written about kids and dogs, and I have done my share of it.* If you want the best book about kids and dogs check out Colleen Pelar’s,  Living with Kids and Dogs Without Losing Your Mind. I recommend it to every parent as there is something for each stage of parenting people (infant through teens) and dogs (puppies through geriatric), and it is filled with practical advice based on Colleen’s years of experience as both a dog trainer and mother.

In the course of my own career, I have noticed that there is a need for good, simple games that allow kids and dogs to play safely with one another. I have gathered ideas from a variety of sources (some of which I remember, others I am sorry to say, I do not and I apologize for that […]

The Most Noble Animal

Let me explain… I have been working on a book while also continuing with our podcast, Your Family Dog, and doing private training. These three activities (along with things such as being a grandmother, grocery shopping, raising a puppy, and having foot surgery, to name but a few) have kept me from my blogging. But, the good news is that I have finished the first draft of my book, and have a moment of time to write other things.

My book deals with a variety of mythological animals and in the course of writing it, I have acquired a variety of Beastiarys. For those of you unfamiliar with the […]

It’s okay to comfort your dog, you are not reinforcing fear! 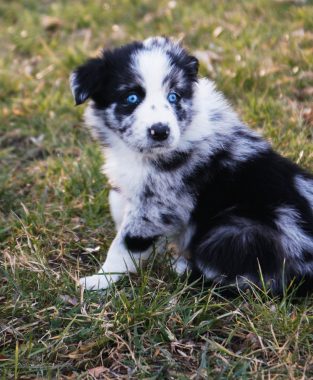 There is a fairly common notion that if your dog is fearful and you comfort him, you are “reinforcing the fear” and thereby making it harder for the dog to conquer this fear. This, however, is not really the case, and likely stems from misunderstanding the difference between emotions (under very little, if any, conscious control) and learned responses (under variable conscious control) to particular situations.

In the February 2019 issue of  the Whole Dog Journal, Linda P. Case has an article on comforting your dog when it is scared and she uses this analogy to illustrate an emotional response:

“I am petrified of clowns, like most rational adult humans (right?!). Everything about them is creepy to me – their red bulbous noses, crazy orange hair, ridiculous cartoon-sized shoes – all of it!

So, let’s imagine that my front doorbell rings and […]