There are two things that anyone who knows me (just ask my children) will testify to concerning my world view. The first is that I explain most things in terms of dogs or dog training. For example, my sister is an occupational therapist specializing in pediatric development. For years we discussed clients with one another, but I will never forget the conversation when I realized that we often face the same challenges. Sara described to me a young boy who had been diagnosed with ADD and was being presented to her because he was difficult to manage and seemingly unable to settle. Sara was not comfortable with the diagnosis of ADD and felt that something else was at play. I remember saying, “Well Sara, if this were a dog, I would ask three questions: How much exercise is he getting? How much sleep is he getting? And, what is his diet like?” Apparently, she had asked exactly the same three questions. Truly, canines are the answer to everything. 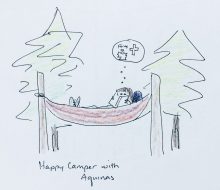 The second is my love of philosophy, especially the ancients and the medieval sorts. For my 41st birthday, the only thing I wanted was Anton Pegis’s translation of Aquina’s Summa Theologica (I already owned Ralph McInerny’s translation). Not only did my husband get me both volumes of Pegis, but I also got the Summa Contra Gentiles! I was one happy camper.

This week I attended a conference with my husband on Natural Law, where there was a lot of talk about truth, knowledge, good, religion, and the nature of man. At lunch on the first day I was seated between two attorneys (This is my lot in life. Find me at any conference, meeting, or forum not specifically oriented towards dogs and the fates will put me next to a lawyer). The attorney to my left was a gentleman from Colorado who was attending the conference specifically because he didn’t know much about Natural Law. We had a pleasant discussion and I was thrilled that I was able to give him an insight into Natural Law that the many lettered presenters were not able to do.* Of course, part of the discussion veered into the dog world as I talked a bit about the need for society and social interactions as essential to the well being of all creatures, dogs and humans in particular.** (See! Philosophy and dogs, how cool is that?)

The afternoon panel spent a lot of time tossing around the idea of good, the good, knowing what is good, the human experience of good, good in relationships, etc. One presenter even ventured an opinion that one could not have the same sort of communal, uplifting relationship with your dog that you can have with another person. Dogs, he claims, cannot share your appreciation of a beautiful sunset or a work of art. Obviously, this man does not own a retriever. Zuzu has an unrivaled appreciation for the natural world, especially if there is a stream.

As a result of all this philosophizing, I began thinking about Plato and his idea of The Good. In the Republic, Plato discusses the nature of reality and asserts that the physical or material world as we know it, is not reality, but a shadowy reflection of the real world that is the Realm of the Forms. The Forms reside in the spiritual or immaterial realm and are the abstract, ideal, unchanging concepts of the things we experience in the shadowlands. The forms may be good, but they are not the ultimate good. The Ultimate Good is above all else and is the basis for understanding all the other forms. One way to think about it is that the forms participate in the Good, and so contain good, but are not The Good themselves. If all this is a bit confusing,
have no fear, for I have found a much easier explanation! Dogs! Of course!

But first, for those who are not familiar with how judging works at a dog show, here is a primer: At a dog show, the dogs who participate are not judged against one another, but against their particular breed standard. For example, it is up to the judge to decide which Irish Setter amongst all the Irish Setters present, best represents the breed standard for Irish Setters. That Best of Breed dog is then judged with all the other dogs in its group (in this example the Sporting Group) to determine which of the group members best represents its breed. Thus, the judge is now asking, is this Irish Setter a better representation of an Irish Setter, than the Clumber Spaniel is a representation of the Clumbers? When you get to Best in Show, you are looking at the top dogs, each a fine representative of its breed and group, and now the judge needs to decide which is the best of the very best.

So, to relate it to Plato and his idea of the forms:  the actual dogs are the real world, the breed standards are the The Forms, and Best in Show is The Ultimate Good. (See Figure. 1). 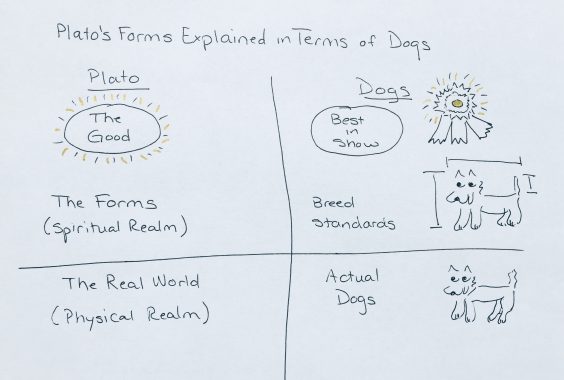 So there you have it, the culmination of my canine and philosophical endeavors, Plato’s forms explained in terms of dogs. What’s next you might ask? Perhaps A Brief History of Time, Canine Edition. 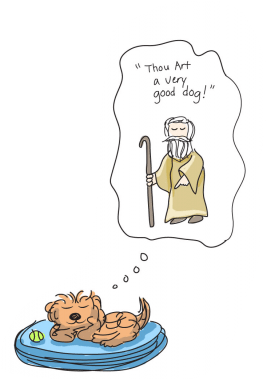 *The way in which Natural Law was first explained to me by a professor at the Pontifical College Josephinum was that Natural Law consists of those things we can’t not know. They are written into our very being and comprise the essence of our humanity. He further stated that the Ten Commandments can be viewed as the first codification of the Natural Law.