Why your puppy should be a social butterfly.

Why your puppy should be a social butterfly. 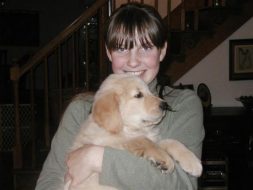 Huddy at 10 weeks old with Emma

When my daughter got her Golden Retriever, Hudson, in January of 2005, she was determined that he would be well socialized. Her previous dog, Molly, was adopted when she was about 1 year of age and was most likely grossly under-socialized to people, places, pets, and the rhythms of life in general. She was quite leary of people and aggressive towards dogs. Try as we might, we were never able to get her past her behavior issues.

Emma kept a detailed log of everyone that Hudson met by 4 months of age. At that time we lived in Spotsylvania county Virginia, a fairly rural area surrounded by the Chancellorsville battlefield. Getting him out to meet people required some planning and creativity on our part. Nonetheless, by 16 weeks of age he’d met 750 people. As a result of this intense effort to socialize him, Huddy adored people and could work a room better than most seasoned politicians.

In general, you should aim to have your puppy meet at least 100 people by four months of age. Consider keeping a log of the type of people your dog meets: babies, boys, girls, tall and short people, men with beards, people with hats, sunglasses, and/or both, etc. All these people look different to your pup and the greater the variety of people he meets the more comfortable he will be as an adult dog. Colleen Pelar has a wonderful Scavenger Hunt for Puppy Socialization* that gives you a checklist of people, places, and things your puppy should encounter.

Any behaviorist or trainer worth their weight in dog biscuits will tell you: the very best way to have a socially sound, well mannered, and stable adult dog is to socialize him, in a positive way, during this critical period. Once the socialization window closes at 16 weeks, it does not reopen, and you are no longer socializing, but counter conditioning. So, when you get your new puppy, commit to introducing him to a variety of people, places, substrates, and objects, when he’s open to it, so you won’t have to hire someone to try and fix him later. 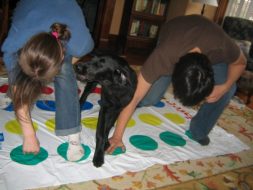 Bingley as a puppy wiggles his way into a twister game.

Some veterinarians will tell you that you should not get your dog out until his puppy shots are complete. I understand their desire to reduce your baby’s exposure to diseases such as parvovirus, I do not want your dog to get sick either. However, according to the American Veterinary Society of Animal Behavior (AVSAB) Position Statement on Puppy Socialization, “[b]ehavioral problems are the greatest threat to the owner-dog bond. In fact, behavioral problems are the number one cause of relinquishment to shelters. Behavioral issues, not infectious diseases, are the number one cause of death for dogs under three years of age.” (Emphasis mine.)

While puppies’ immune systems are still developing during these early months, the combination of maternal immunity, primary vaccination, and appropriate care makes the risk of infection relatively small compared to the chance of death from a behavior problem. Enrolling in puppy classes prior to three months of age can be an excellent means of improving training, strengthening the human-animal bond, and socializing puppies in an environment where risk of illness can be minimized…In general, puppies can start puppy socialization classes as early as 7-8 weeks of age. Puppies should receive a minimum of one set of vaccines at least 7 days prior to the first class and a first deworming. They should be kept up-to-date on vaccines throughout the class.

In addition to a good puppy class, your dog can be introduced safely to a variety of things, if some guidelines are followed:

1) DO NOT take him to the dog park, or to places like PetSmart where the dog population is not regulated before he is 5-6 months of age as his shots and his socialization are not complete.
2) DO take him to puppy class with a positive reinforcement trainer.
3) Have friends over for margaritas and puppy socializing. Be sure to invite friends with kids.
4) Take him to Home Depot, Lowes, or Tractor supply to meet people. Most of these brand stores will let you take dogs in, but you can always stand outside and meet people as they head in.
5) Find out Mass and service times for your local churches and synagogs and stand outside as the service is letting out. You will meet the entire world.
6) Ask a friend with preschool age children if you can bring him to meet the kids.
7) Stand in the foyer of a Barnes and Noble and greet people as they go in and out.
8) Stand in front of your local Starbucks and greet people.
9) Allow him to approach people, places, objects, etc at his pace. DO NOT allow anyone to overwhelm him or to pick him up without your permission, as this can be uncomfortable or distressing to your pup. If someone asks to pet him say, “It’s fine with me, but you will have to ask Fido.” Then tell her to put out her hand. If Fido goes over to her, then she can pet him. If Fido does not go over to her, do not force him (Fido may be tired of meeting people right then) and say, “Sorry, I guess he isn’t in the mood right now.” Build your relationship with him by protecting him and allowing him to explore novel things (people included) in a way that is comfortable for him. See: https://apositiveconnection.com/2013/08/beware-of-cement-pigs/.
The AVSAB sums it up nicely, “During this time puppies should be exposed to as many new people, animals, stimuli and environments as can be achieved safely and without causing over- stimulation manifested as excessive fear, withdrawal, or avoidance behavior.” In other words, be smart about how you socialize your dog. You want him to experience the world as much as possible, but in a way that accentuates the positive and minimizes the risk of disease and fearful experiences. Help Fido to be the very best version of himself as a puppy and as a happy, well adjusted adult. 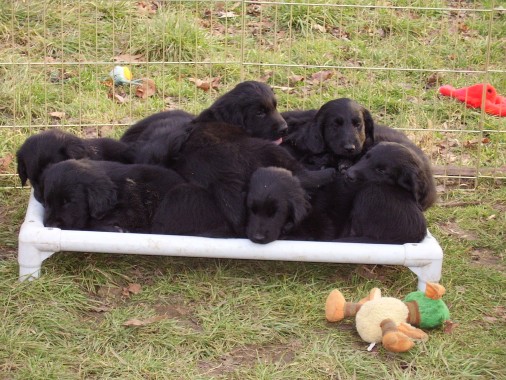