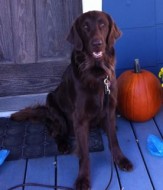 About a week ago my daughter, son-in-law, and I picked up the newest addition to our clan of canines. Tex, a liver-colored flat-coated retriever was available from Bingley’s breeder and after careful consideration of all his attributes (including some health issues that we agreed were very manageable), he seemed like the perfect dog for their little family. He is a 2 1/2 year old, intact male who is highly social with people, has had a fair amount of training, and is a typically active flattie. We loved him from the instant we learned about him. The breeder was in Dresden for some field dog training and brought Tex with her, so off we went to get Emma and Thomas’s new best friend.

In the past, we have introduced puppies to our current canine companions, and though we have had boarders, we have not added an adult dog to the clan since 2002.  Personally, I have found that adding puppies (~8-10 weeks) is easier than adding an adult dog when you have other dogs in your home, as there is a certain puppy license that adult dogs will grant to youngsters under 4 months of age. Adding an adult dog requires that you appreciate the personal space that each dog has and allow them to move freely around one another. However, no matter the age of the newcomer, adding any dog to any household requires a certain amount of preparation, tact, patience, and, if you have other dogs, a high level of canine diplomacy for peace to reign supreme.  I have some basic rules that I like to follow when introducing dogs, and in searching my archives I found an article from The Whole Dog Journal  called “New Dog Do’s and Don’ts“* that has some suggestions as well for introducing a new dog to your home whether or not you have other pets. Some of her best ideas are about pre-planning for your pet, and what you need to be aware of when deciding to get a dog:

Often, new-dog ventures fail most frequently when people don’t take enough time – time to research what sort of dog is really best for them, time to prepare for the dog’s arrival, and time to spend with the dog. In fact, the first thing I ask when I hear someone is thinking about getting a dog is, “How much time do you have?”

I couldn’t agree with her more! I do not recommend bringing a new dog into your home if you do not have ample time to make it work both short and long term. We got Tex on a Thursday when Emma and Thomas were on fall break (until Sunday evening) and I did not schedule anything on my calendar until the following Monday. We wanted to be sure that we had ample, relaxed time to make Tex and the rest of the pack comfortable.

In addition to allotting a surfeit of time, we did the following to introduce Tex to our household: 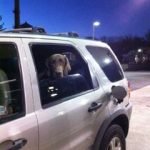 Don’t put unfamiliar dogs together in a small space, such as a car. That can lead to a very uncomfortable situation for everyone.

It will take some time for everyone (you included) to be comfortable with the new arrangements so be patient with all involved and remember that time and space are your best friends here! Monitor your dogs’ interactions and give them time together and apart. Make sure that all the dogs have a safe place to go to re-group that will not be invaded by others. Bingley spent time with me in my office with the gate closed while Tex and Emma hung out in the other office with a baby gate across the doorway. Buckley slept in our bedroom in his spot by the bed. We found that time together and time apart made for a an easier transition for everyone as no one was forced to make small talk when they didn’t feel like it.

Tex has gone to Michigan with Emma and Thomas, but will be back for holidays and vacations and we will start the introductions all over again from step 1 so that no one gets overwhelmed. We will still use gates as necessary, but I know that the need for them will diminish over time as everyone becomes not only accustomed to the changes, but happy to have Tex aboard.

Tex and Annie (Thomas’s parent’s dog) met that weekend as well. Note: they are giving each other extra space by not looking directly at one another.

Another Whole Dog Journal resource is: Managing a Multi-dog Household