Summer is in full swing and after the hard winter we had it is welcomed with open arms! Our dogs have been enjoying the AC on hot days and the retrievers are taking full advantage of their pond and the lake where we recently bought a cottage. Before we built a pond in the backyard, I used a large hard plastic wading pool and the dogs enjoyed that as well as romps in the local creek. Water is a great way for dogs to cool off in the summer but one thing to be aware of is an uncommon but deadly condition called water intoxication that occurs when a dog (or person) takes in more water than it can handle. Signs of water intoxication include: “lethargy, bloating, vomiting, loss of coordination (stumbling, falling, staggering), pale gums, dilated pupils, and glazed eyes” (Whole Dog Journal (WDJ), June 14). When excessive amounts of water are ingested the sodium levels outside cells are depleted and the body responds by increasing fluid intake in the cells.  This causes organs,including the brain to swell. As the pressure in the brain increases, cells die off and “the dog may have difficulty breathing, develop seizures, and lose consciousness” (WDJ, June 2014). Dogs can develop and die from water intoxication in the span of just a few hours.

In theory, water intoxication can happen to any dog who ingests too much water, too fast. The condition advances more quickly in small dogs, simply because their bodies may be more easily overwhelmed by the excess fluid. But Border Collies and other high-drive dogs – including Jack Russell Terriers and Papillons…seem more likely to develop it than other breeds. (WDJ, June 2014)

The WDJ gives four precautions you can follow so that your dog’s water time remains fun and safe:

*Choose Flat Rather Than Round Objects to Retrieve. It makes sense: A dog who is retrieving a round object like a tennis ball has to keep his mouth open wider than a dog who has closed his mouth around a flatter object

*Know Your Dog. Being aware of how your individual dog interacts with water is key. Some dogs are very careful swimmers, keeping their nose pointed toward the sky and their mouths clamped shut…Does yours like to splash in the pool or bite at the stream of water from the hose or sprinkler? Then she’s likely at greater risk…

*Discourage Diving For Toys. The key to avoiding water intoxication is curtailing any activity that can lead to water intake. Biting the water from a hose is also a no-no: Because that water exits under such high pressure and it’s so fun (read rewarding) your dog could ingest far more that is good for him.

*Take Frequent Breaks. Regular time-outs on terra firma not only interrupt any ingestion of water, but also give a dog the opportunity to rid her body of extra fluids by urinating. Also, tired dogs tend to swim lower in the water, and may inadvertently take on more water than their better-rested counterparts. (WDJ, June 2014)

My Bingley is an avid water dog and when we play fetch at the lake or creek, I make sure that he has plenty of tosses on land as well as in the water and that he takes frequent brakes to rest, urinate, and hang on land for 5-10 minutes before returning to aquatic endeavors.

Moreover, though he loves the water, he is not a graceful swimmer like our Golden, Hudson. Bing tends to have his rear end low 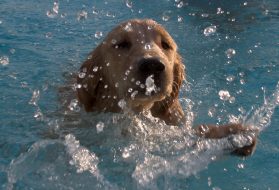 in the water so that his front legs come out of the water as he swims, and it is an inefficient and exhausting way to maneuver through the water. I recently bought him a life preserver (http://www.llbean.com/llb/shop/63577?feat=life%20jackets%20for%20dogs-SR0&page=nrs-canine-flotation-device&attrValue_0=Red&productId=1067052) from L.L. Bean for when we go out in a boat and to help him swim more efficiently and safely in the water by keeping his body level and higher in the water. It keeps his front legs in the water thereby evening out his stroke and reducing fatigue, and it makes keeping his head out of water easier. He also swallows a lot less water when he swims with a life preserver, thus reducing his chances for water intoxication and that makes playtime a lot more fun for both of us!