Stranger Danger, or “I want my dog to be like Rin Tin Tin, and protect me!”

Ah yes, the “I want my dog to protect me from strangers, dangers, and things that go bump in the night. I want him to be like Lassie (or Rin Tin Tin, or Benji, or any other fictional heroic canine) and be able to recognize the bad guys and protect me.”  That’s great! Who wouldn’t want that? The problem is, those dogs (or more precisely, the roles that they played) are fictional. They do not exist in the real world and to assume that you can train your dog to be protective only when necessary (and to determine the need on its own) is highly unrealistic for almost all dogs and their owners (including yours truly).  When I mention this to people wanting protection dogs, they often reply that Police dogs can tell the difference and only attack on cue. Exactly! They only attack on cue from their handlers. We do not have lone Police dogs (or even Police dog pairs) patrolling the streets of cities and towns assessing potential wrong doings and protecting the general public from odious characters. These highly trained dogs are always with their handlers and are trained to be very responsive to exact cues.
Therefore, when the subject of protection arises, I ask people to define, carefully, what they mean by protection, as this can be a very dangerous place to wander with your dog.  Ask yourself honestly: Do you really want your dog to be aggressive to strangers?  And, how is the dog suppose to know who is a good stranger and who is bad one, especially if you are not there? What if someone comes to your 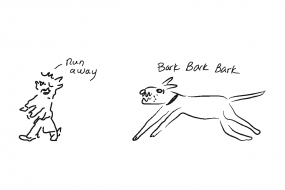 home when you are not there and the dog is in your yard, or your back door is unlocked or left ajar by mistake? Perhaps it is a child whose ball was knocked into the yard, or an old friend stopping by spontaneously to say hi? Or a different UPS guy? Or a new neighbor coming over to introduce herself, or use your phone? These people are strangers to your dog. Do you honestly want  him to be aggressive and to take matters into his own paws to protect the homestead?
I propose that what you probably want is your dog to have a strong social drive to people. Why? Because the vast majority of people you meet will be people with whom you desire your dog to be friendly. Moreover, who wants to risk a dog biting someone who is not a threat? And, believe it or not, a well socialized dog is more likely to be able to react to real dangers or concerns. Because he 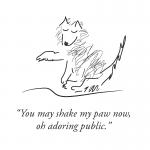 knows what safe looks, feels, and acts like, he will be suspicious of those things which do not lie within his field of experience. The reaction may not be huge, but if you know your dog, you will know when he is uncomfortable or concerned, just as you know when all is well with him.
In the case of my sister’s condo associate who lives alone (see last week’s blog for Part 1 of this story) and wants a dog larger than the 30 pound limit, I think that she is probably motivated by two things: 1) she wants her dog to bark at the door when people arrive, and 2) she will feel safer walking at night with a large dog rather than with one that can be mistaken for a giant powdered sugar donut. I know that most persons of nefarious intent will go to another door rather than risk a barking dog alerting the owner or neighbors, and they do not want to risk being bitten. That said, a larger dog has a deeper bark and is more likely to cause someone to pause. My Bingley has a very deep bark that is kinda scary, and he has caused more than one person to re-consider coming to the door. A chihuahua, or Pomeranian is not as likely to scare someone off either at the door or keep someone at bay when walking out on the street (but it is probably better than no bark at all!). Therefore, in this instance, when you want a dog with a definite presence, you need a bigger dog. What you don’t need is a meaner dog.
Thus, the question remains: Can small dogs be protective as well as companionable? Yes. But how effective are they? It depends, again, on how you define protective. If you want a dog to bark, growl, snap at or intimidate strangers, get a small dog and do not socialize him to people, places, and things. This will create a “protective” dog who will react out of fear, and which people will avoid, but are unlikely to consider a serious threat (Which btw, is not smart. Small dogs can bite seriously, multiple times, and cause enough damage to require stitches, strong antibiotics and perhaps plastic surgery if the bite is to the face.) But I ask you, how happy is this dog and how happy will the owner be with a dog that hates/fears everyone? Far better to have a dog that likes people, and barks at appropriate times, such as at the door, or on cue. Small dogs can be very unpleasant and people may avoid them, but they seldom strike fear into the hearts of the masses.
So in summary, if you want a dog that will “protect” you or at least give the illusion of protection, bigger dogs are more likely to fill the bill. Dogs up to 60~75 pounds (most labs, goldens, setters, spaniels, other retrievers) would do well in a mulit-unit complex and are a size that most people can manage effectively, and which would provide a level of comfort (i.e. when walking at night these guys are large enough to cause someone pause) or protection to the owner. Remember however, that these dogs, like any dog, require good management, a strong relationship with their owner and training to make them successful members of society. Without those three things, the size of the dog does not matter, it will be a problem and/or nuisance to the owner and the neighbors. 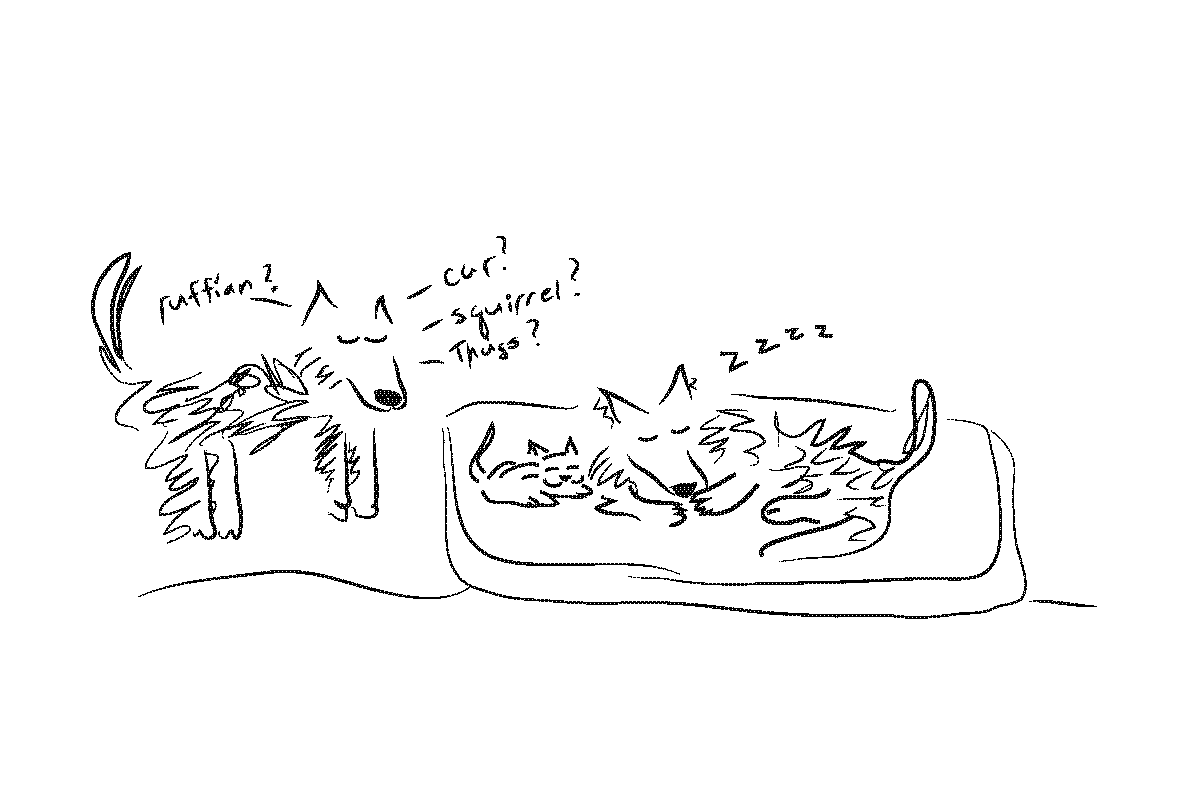